Fearful that I was turning into "that guy" (the one glued to his CrackBerry mobile device to the oblivion of the magic surrounding him), I accepted Shelley's dare not to use "that thing" all day. (Although in my defence, it was 20 seconds at a time to record the event and then devoting my ever attendant attention to my kids and Disney propaganda).

The day dawned bright and warm, and we arrived at Epcot Centre with little fanfare. Maybe it's the physical layout of the site, or maybe/probably the result of waning legs and energy, but things seemed to be further away today. We purposefully collected our FastPass for "Soarin'", another vaunted extra-sensory experience; I cringed my way through Test Drive, an immersive simulation of what crash test dummies must endure; Shelley and I traded off the kid-minding to fulfill a milder version of a Gary Sinise-hosted space mission; soared over California in "Soarin'" (next time, I'll keep my eyes open for the whole thing); boated our way through Living with the Land.

On to the Akerhaus restaurant for a Princess-themed lunch where I pigged out on venison sausage and Reiko held audience with Princesses Belle, Aurora, Cinderella, Snow White, and Ariel.

As we retreated for a mid-day siesta at our retreat, we garnered a Baby Tigger stuffed animal souvenir somehow.

Our evening return was in time for our dinner reservation (grilled Mahi Mahi for me) after which we ventured undersea Finding Nemo. Our party split up after that, Reiko and I completed a Kim Possible mission at the China pavilion while Kai and Shelley had a Turtle Talk with Crush. We reunited under the geodesic dome and thusly concluded our Disney adventure.
at 11:41 p.m. 1 comment:

The day as presented in Facebook statuses (and accompanying pictures):

09:26 a.m. - got funneled to the gift shop after the Pooh Bear ride - these people know what they're doing

09:32 a.m. - on standby for Peter Pan's Flight. Just think I could be arriving at the office on an ordinary week.

10:54 a.m. - thought PowerPoint sermons were cutting edge - then saw "Mickey's PhilharMagic"... how am I going to get 3-D Smell-o-vision into the sanctuary?

11:25 a.m. - ice cream and popcorn for elevensies; in line for a Tigger-Pooh Bear photo op

12:25 p.m. - respite from the heat and sun; back to the resort for lunch, poolside and down time before returning to Magic Kingdom

05:18 p.m. - back at it. Portrait with Pluto, picked up FastPasses for Jungle Cruise and waiting for our table at Liberty Tree Tavern. Crayon colouring limited to red and blue (and white)

Up early for the morning warm-up at Animal Kingdom, where Mickey, Minnie and Pluto hyped up the crowd (the mainline church doesn't have a chance against the likes of this "Call to Worship" liturgy).

Much of the day amounted a game of Pokemon Snap! as I tried to capture images of the wildlife in flattering and interesting poses.

In spite of all that was available, Kai's favourite parts of the day were digging for dinosaur bones (read: playing in the glorified sandbox)

We started in Detroit (Romulus, technically)

and arrived in Orlando onto Disney World.

An afternoon through Magic Kingdom had some initial trepidation about the "Buzz Lightyear Space Ranger Spin," we got assembled for our mission:

and defeated the enemy.

Apart from Shelley sitting in gum, me leaving my glasses and meal medication in the resort room and a slightly broken camera (which got fixed if you've seen the above posts), it was a well-orchestrated first half day of Mouse Magic.
at 11:32 p.m. No comments:

After an Olive Garden supper and a hotel night in a familiar-looking room,we shuttled to the airport where we stretched out before the migration south. 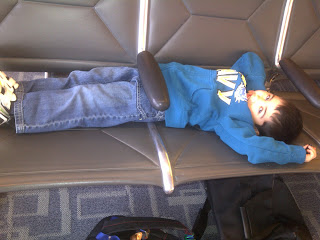 After shuttling our way to our Disney resort, we blitzed our way through the Magic Kingdom: jamboreed with the Country Bears; toured up and down Swiss Family Robinson Treehouse; saved the universe's power supply with Buzz Lightyear; filled the laugh can at Monsters Inc.; staked out a viewing position for the Electrical Parade while Shelley Thundermountained. We found an out-of-the-way vantage point for fireworks with supper and kept warm, crowded up for our bus back to our resort.

At the Annual Congregational Meeting this morning, I was thanked for a great first 6 weeks; why don't I take the next one off? 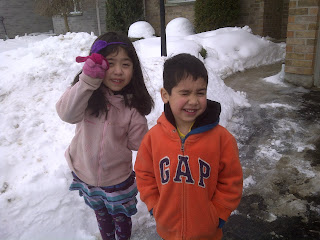 In fact, why don't I take the family to Florida and forget about the cold and snow?
at 3:34 p.m. No comments: